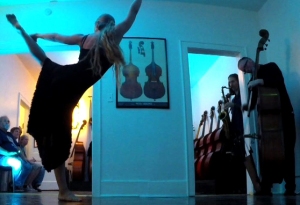 The Quantum Bass Center is a unique space that sells and repairs acoustic basses, and offers masterclasses in bass performance. Bassist Elizabeth Steves, who serves as its director, founded the center as a resource for the highest quality equipment and education for bassists. Located in the historic Midtown Art Center building in Houston, the Quantum Bass Center has two showrooms filled with basses from many different time periods, two smaller salon rooms used for private lessons, and a repair workshop down the hall. In August 2014, the Michele Brangwen Dance Ensemble presented live performances in this space. The dance and music were created spontaneously in the moment by all the performers, based on concepts designed in turn by different ensemble members. These improvisations were inspired by space, and fueled by our connection to each other and the audience.

Three elements come together in performance: the performers, the audience and the space. When a performer walks out onto the stage, they can feel the audience and the audience can feel them. If the channels are open on both sides of the curtain so to speak, no matter the size of the concert venue, it’s an intimate moment. The mysterious bond between performer and audience that occurs in live performance is difficult to accurately describe; it’s a group experience and yet also intensely personal, and it is that dichotomy that gives it an other-worldly quality.

I find that the third element of space, however, is even more intangible. Although its not often discussed, every stage or performance space has its own vibe that it communicates to performer and audience alike. It’s inexplicable but some spaces lend them themselves to performance and what constitutes this is much more than architectural. As a performing organization we are looking for places where we can connect with our audience. We are looking for spaces that will speak to us.

Maybe it was because the rooms were filled with basses from many different time periods; or the fact that the center was started out of Elizabeth Steves’ passion for her art form; or the poetry of knowing that just down the hall, that which is broken is carefully restored by hand, but we knew immediately that the Quantum Bass Center was an ideal place to perform. It embraced us and the audience in its two lovely main rooms. Tall upright basses lined two of the walls, like audience members in standing room only, or still dancers displaying their exquisite shapes – you decide.

The first of two episodes of ARTCAST created at the Quantum Bass Center airs this Sunday at 8 p.m. E.T. on YouTube.com/brangwendance. It features Lindsey McGill, dancer; Thomas Helton, bass; and Seth Paynter, saxophone.

Please remember that following each broadcast, episodes are available for viewing any time on YouTube.com/brangwendance or brangwendance.org

WordPress.com is excited to announce our newest offering: a course just for beginning bloggers where you’ll learn everything you need to know about blogging from the most trusted experts in the industry. We have helped millions of blogs get up and running, we know what works, and we want you to to know everything we know. This course provides all the fundamental skills and inspiration you need to get your blog started, an interactive community forum, and content updated annually. 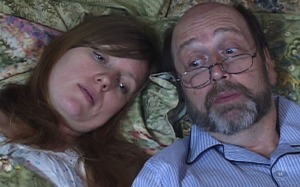 NO STANDING IN ST. PETERSBURG: PETERSBURG, part 1 of award-winning filmmaker Peter Josyph’s serial film, premiered as part of ARTCAST Season 1. We are pleased to present the premieres of the film’s next two parts in ARTCAST Season 2.

The charming Chekovian characters of Elena and Ilya that we experience in part 1 return, now as Elena and Raymond, two New York City actors who have played the roles on screen that we see in part 1. Yes, part 1 is actually a film within a film, but it also sets the stage for the adventures of three actors, a journalist, and a filmmaker, in the parts to come.

ASTORIA takes us into an early-morning conversation between the actor Raymond (played by Raymond Todd) and his wife Olya (played by Anna Istomina) about his ability to do an authentic-sounding Russian accent for his part. His wife, a native of Russia, tries to calmly explain that his accent is not in any way believable.

Those familiar with Peter Josyph’s work in the landmark documentary LIBERTY STREET: ALIVE AT GROUND ZERO, and the lesser known but still outstanding ACTING McCARTHY (featuring interviews with Billy Bob Thornton and Matt Damon), may be surprised by the lightness and humor in ASTORIA and FILM AT THE TOP. These films are funny in the truest and best sense because the human behaviors that are laughable are filmed through the lens of Josyph’s profound compassion for his characters.

As I mentioned in my previous essay “The Lelias,” the feeling of being in the room with characters in a story is for me the ultimate experience when watching a film. This feeling of being privy to a private moment pervades ASTORIA. John Cassavetes believed that a close-up of a face in a film is successful if it makes you want to touch the skin. ASTORIA is filled with close-ups to which Cassavetes would no doubt give his approval. The sound of Raymond and Olya’s voices, the murmuring and singing of Olya, the sound as she flips the pages of the George Simenon book she is holding in her hands, jump out with a kind of soft crispness that makes you feel you are sitting next to them. And maybe you are, because art can indeed take you to another place.

While each short film stands alone, I encourage everyone to watch part 1 before watching ASTORIA. Here is part 1:

Part 2 airs Sunday at 8 p.m. on youtube.com/brangwendance. You can also watch it any time after the broadcast.

The film critic and scholar Ray Carney surmised that the work of independent filmmaker John Cassavetes was not given the critical acclaim it deserved because his films required the viewer to become involved. With most films, we observe the action from a safe distance. It may be a moving and powerful story, but we are still watching a story and able to stay outside the frame so to speak. We are voyeurs. With the films of John Cassavetes, you are in the room with the characters. This is for me a kind of cinema paradise. I feel like I am experiencing life, with all its incredible complexities and contradictions and mystery.

IN AND OUT OF THE SHADOWS, a new film with choreography by me and music by Tim Hagans, tributes Cassavetes’ first film SHADOWS. Released in1959, SHADOWS is the story of 3 siblings in New York City: Hugh, a jazz singer; Ben a jazz musician, and Lelia, a painter. Shot in black and white, we can see that the siblings have varying skin colors. One of the many points Cassavetes was trying to make in SHADOWS was that color was a question of perception and not reality. The film is about the emotional journey of the central character of Lelia. Her journey is a human journey, and therefore a universal one.

Lelia is the youngest character in the film. She is energetic and hopeful, moving in literary circles of people who see no color, until she meets a man who courts her and wins her affection. They become lovers and this is her first love experience. The young man becomes alarmed, however, when he meets her oldest brother, the dark-skinned Hugh, and realizes the woman he is having an affair with is black. Lelia is devastated at his reaction. She murmurs “I love you, doesn’t that mean anything.” Perhaps those words are key to understanding SHADOWS and all of Cassavetes’ films to come. He was continually exploring our human need for love and the power of love, and our turning away from it. Our turning away from what we crave most, for the most absurd of reasons.

It’s impossible to watch SHADOWS and not fall in love with the character of Lelia. When Tim Hagans wrote the music for IN AND OUT OF THE SHADOWS, he wrote it from her perspective. It’s a journey of what its like to discover the unfairness of life and then to come out on the other side and move forward. The musicians are expressing her emotional narrative when they perform the music. And so in making the dance, I decided to make the choreography follow the same narrative. Rather than a work where the different performers represent different characters in the film, we all instead represent Lelia. So we have Lelias of different genders and ages.

The middle brother Ben, runs through the city with his two buddies, and the only conflict they experience is their youth and their desires against the world in general. There are no issues of skin color. Scholars have written that Ben is passing for white, but to me it’s more that his 2 buddies see no color. They are just friends. I was on the subway across from 4 happy, bubbling teenagers having an animated discussion about skin color, of which they represented the many shades of the characters in SHADOWS from the snow-white lover of Lelia to the dark-skinned Hugh. It was as if they were discussing as insignificant a descriptor as hair or eye color. This seems indicative of Cassavetes’ idea that loosing the openness of youth is to the detriment of adulthood. I used the feeling of the boys in SHADOWS as they bound through the New York City streets — budding hipsters — also in the choreography.

We all suffer to some degree the pain of being judged by what is perceived on the surface about us, rather than the essence of our beings. People’s insecurities make them ostracize people for a variety of reasons, reasons that exist in their minds rather than in reality. If we all some day in future are the same color, will society find some other equally unreasonable thing to use as justification for what the playwright Arthur Miller so eloquently called ‘the breaking of charity” with each other.

Lelia moves forward out of her disappointment. She moves forward awkwardly and she is changed inside, yet in many ways she is just as vibrant as before, but in a different way. As Tim Hagans said when discussing the music, she emerges as a mature person. The choreography returns to something that is fluid but a little broken. We cannot erase our past, and sometimes it breaks us. So we try to move forward and one way we can do that is by finding each other.

You can watch SHADOWS in its entirety on YouTube. If you type in “Cassavetes SHADOWS” in the YouTube search engine, it will come up. Like all great art, SHADOWS makes us look a little deeper at each other, and ourselves.

We hope you will also join us for our new film IN AND OUT OF THE SHADOWS, Sunday November 9 at 8 p.m. ET on youtube.com/brangwendance

Please remember if you miss the broadcast, you can still watch the episode any time on YouTube.com/brangwendance or on brangwendance.org.